Rimini is home to some… INCREDIBLE COUNTRYSIDE!
Valmarecchia, Heading Inland from Rimini

Valmarecchia is an ancient valley in the Rimini countryside whose history has been lost in the mists of time. Once a cradle of the ancient Villanovan civilisation (head to Verucchio museum to learn more), it was colonised by the Romans, whose ruins and traditions are dotted throughout the area. In fact, legend has it that a majestic Roman temple dedicated to the god Jupiter once stood on Monte Giove di Santarcangelo and that vineyards lined its slopes for as far as the eye could see. It was on this hillside that a delicious ruby red wine was produced and named “Sanguis Jovis” (blood of Jupiter), and later, Sangiovese, (i.e., Romagna’s best wine!).

However, there is no doubt that Valmarecchia’s golden age occurred between the Middle Ages and the Renaissance era. In fact, during this time, the valley was populated by a dense chessboard of fortresses and fortified villages and became the spectacular setting of the eternal feud between the lords of Malatesta and Montefeltro (i.e., the never-ending power struggle between Federico and Sigismondo). Thanks to these events, the valley is still home to a historical heritage of exceptional and rare beauty. Just think of the imposing fortress of Verucchio (where the Malatesta dynasty began), the dreamy setting of Sant’Agata Feltria, the splendid and mysterious castle of Montebello, and the charming fortress of San Leo.

But Valmarecchia is not only known for its castles and knights. Today, the valley is home to a fairly rural population (head to the MET museum in Santarcangelo di Romagna to learn more), where an innate talent for hospitality is combined with a priceless cultural heritage.

A tour of this valley deserves a stop-off at a few characteristic town squares to indulge in a spot of relaxation and some local delicacies at a rustic restaurant with a good glass of good wine in hand. Here, you can learn about and listen to local music from Pennabilli (Tonino Guerra’s birthplace) and Santarcangelo, which travels through the entire valley. 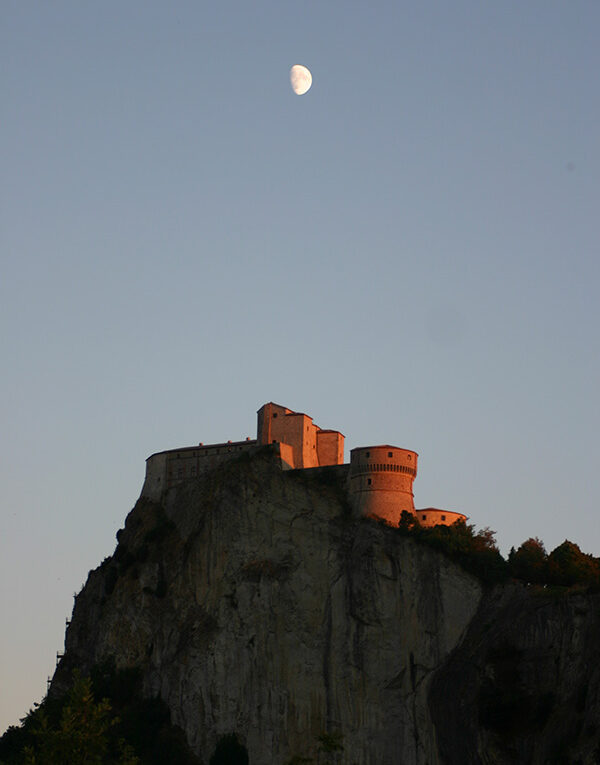 Rimini: Fortresses, Castles and Medieval Villages
From the Sea to the Mountains by Bike
Valconca, Heading Inland from Rimini
Rimini what… INCREDIBLE COUNTRYSIDE!